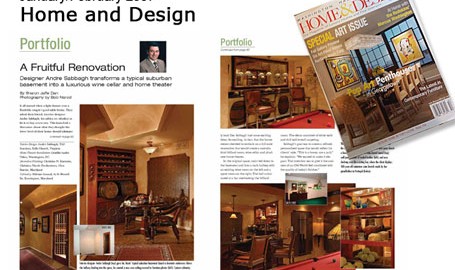 In the hallway leading to the basement space, André Sabbagh created a new cove ceiling covered in Venetian plaster. It all started when a light fixture over a Rockville couple’s pool table broke. They asked their friend, interior designer André Sabbagh, for advice on whether to fix it or buy a new one. This launched a discussion about what they thought the lower level of their home should ultimately look like. Sabbagh had some exciting ideas. So exciting, in fact, that the homeowners decided to embark on a full-scale renovation that would create a one-of-a-kind billiard room, wine cellar and plush new home theater.

In the original space, stairs led down to the basement and into a stark hallway with an existing wine room on the left and a spare room on the right. The hall culminated at a bar overlooking the billiard room. The décor consisted of white walls and dull wall-to-wall carpeting.

Sabbagh’s goal was to create a refined, personalized space that would reflect his clients’ style. “This is a home, not a pub,” he explains. “We wanted to make it elegant. The intention was to give it the coziness of an Old World feel combined with the quality of today’s finishes.”

The wife, whose father and grandfather were both winemakers, asked Sabbagh to integrate two large wine barrels made by her father into the design. So he designed custom cabinetry that encompasses the barrels as well as additional wine storage. Then he created a cozy seating area in front of the cabinetry where the homeowners and their guests can enjoy a bottle of wine or play a game of cards.

–Read the rest of the article here: Home and Design Magazine – January/February 2007 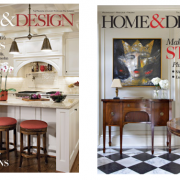